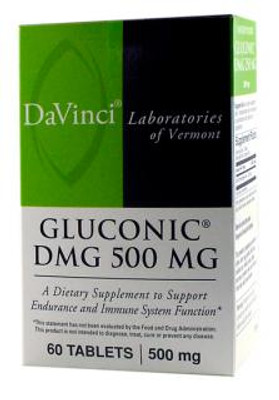 A dietary supplement to support immune system, circulatory, cardiovascular, neurological functions, muscle recovery and endurance.* Dimethylglycine (DMG) is a nutrient which is found in the cells of both plants and animals. The human body produces DMG in very small amounts. Supplementing the diet with higher levels of DMG greatly improves the nutritional environment of the cell. Dimethylglycine has been found effective in supporting immune system function and better utilization of oxygen at the cellular level.* DaVinci??; Laboratories of Vermont has been awarded three U.S. Patents for N,N-Dimethylglycines value and use in improving immunity and for benefiting cellular processes.* DMG reduces lactic acid build up in the muscle thereby shortening recovery time after strenuous exercise and improving endurance.*

Suggested Use: As a dietary supplement, take 1 chewable tablet, one to three times daily or as directed by your healthcare practitioner.