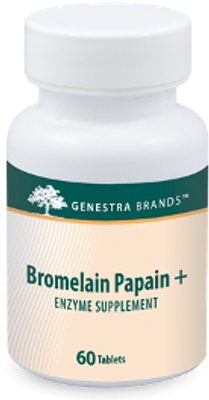 Additional product info: Inflammation is characterized by local redness, swelling, heat, pain and loss of function (1). Osteoarthritis (OA) is a common articular disease. The therapy in modern medicine includes the use of Non-steroidal anti-inflammatory drugs (NSAIDs) and steroids, which are associated with adverse reactions and do not reverse the pathological process of the disease (2). A growing body of research suggests a role for more natural and safe alternatives for the management of pain and inflammation. Some areas of research include supplemental essential fatty acids, herbs such as ginger, turmeric, and boswellia, proteolytic enzymes, and bioflavonoids (3).

Bromelain is the name given to the crude aqueous extract obtained from the stem and fruit of the pineapple plant (Ananascomosus Merr.). Its main active components include a number of enzymes showing proteolytic activity, which were first shown to be anti-inflammatory by Uhlig (1981). Bromelain’s mode of action as an anti-inflammatory and analgesic agent is thought to be multifaceted. There is experimental evidence to suggest that its effects on blood coagulation (through increasing serum fibrinolytic activity) and prostaglandin levels (by decreasing levels of PGE2 and thromboxane A2) may be important in reducing inflammation. Its action as an analgesic is thought to be both as a secondary effect of reducing pain-inducing factors, such as oedema, debris and immune complexes, and through a direct influence on pain mediators such as bradykinin. A study investigated the effects of bromelain on mild acute knee pain of less than 3 months duration in otherwise healthy adults. Two validated questionnaires (WOMAC knee health Index and the Psychological Well-Being Index) were completed at baseline and after one month’s intervention with bromelain, randomly allocated to volunteers as either 200 mg or 400 mg per day. In both treatment groups, all WOMAC symptom dimension scores were significantly reduced compared with baseline, with reductions in the final battery (total symptom score) of 41 and 59% in the low and high dose groups respectively. In addition, improvements in total symptom score and the stiffness and physical function dimensions were significantly greater in the high-dose (400 mg per day) compared with the low-dose group. Compared to baseline, overall psychological well-being was significantly improved in both groups after treatment, and again, a significant dose-response relationship was observed. This open study has shown a significant effect of bromelain on reducing symptoms of knee pain and improving well-being in otherwise healthy adults. In addition, improvements were significantly higher in a number of physical and well-being dimensions in the group receiving the higher dose (4).

The inflammatory response is also a predictable phenomen on that ensues musculoskeletal injury. While this response is a necessary component of the healing process, uncontrolled inflammation may prolong skeletal muscle recovery after intense exercise or training induced injury. Consequently, this type of muscle injury may delay return to normal function. Previous research has suggested that oral supplementation of protease may shorten recovery time after injury. It is believed that this is accomplished through early inhibition of the arachidonic cascade resulting in accelerated healing. Twenty healthy males (10 pairs) aged 18–29 years participated in a study to evaluate the effects of protease supplementation on muscle soreness and contractile performance after downhill running. Each pair consisted of individuals matched for age, height and weight. One member of each pair was randomly assigned to a treatment group receiving protease supplementation (n = 10), while their matched counterpart received a placebo (n = 10). All participants in the experimental group received protease supplementation over a 4-day period. During this period, they consumed two protease capsules four times a day. Each capsule contained 325 mg pancreatic enzymes, 75 mg trypsin, 50 mg papain, 50 mg bromelain, 10 mg amylase, 10 mg lipase, 10 mg lysozyme and 2 mg chymotrypisn. The results of the study suggest that protease supplementation hastens recovery of contractile capabilities and attenuates increases in perception of pain after downhill running (5). Another study determined the effectiveness of protease supplementation in attenuating eccentric exercise-induced skeletal muscle damage and inflammation. Subjects were randomly assigned to consume 5.83 g daily of either a cellulose placebo (N = 15) or a proteolytic supplement containing fungal proteases, bromelain, and papain for a period of 21 d. Significant group differences and another strong trend were observed for flexion indicating higher force production in the protease group. Significant group × time interactions were observed, including elevations in circulating eosinophils and basophils in the protease group coinciding with lower levels of serum cyclooxygenase 2, interleukin 6, and interleukin 12 in this group. Protease supplementation seems to attenuate muscle strength losses after eccentric exercise by regulating leukocyte activity and inflammation (6).

In the course of chronic pancreatitis, exocrine insufficiency with steatorrhea is a major clinical problem, which becomes overt after destruction of more than 90% of the gland. In patients with exocrine insufficiency due to chronic pancreatitis, pancreatic enzyme replacement therapy reduces maldigestion, prevents weight loss, and improves abdominal symptoms such as diarrhoea and gas bloating. A prospective, randomized, placebo-controlled, double-blind, crossover, and multicentre in design study was conducted to prove on a lipase-per-lipase basis the equivalence of pancreatin mini microspheres (Creon 10,000 minimicrospheres) and pancreatin microspheres (Creon10,000 microspheres). 37 patients entered the run-in period and during the entire study, patients took four capsules of identical appearance, each containing10.000 Ph. Eur. units lipase, during every meal and two capsules with every snack. Pancreatin mini microspheres and microspheres were equally effective in improving the coefficient of fat absorption (CFA) in patients with exocrine insufficiency due to chronic pancreatitis. Both preparations were well tolerated, and mild adverse events were similar in both treatment groups (7). Short-term benefit of 8 weeks pancreatic enzyme supplementation has been shown to improve the absorption of dietary fat, protein, and total energy and nitrogen balance in patients receiving local resection longitudinal pancreaticojejunostomy (LR-LPJ) for chronic pancreatitis. Supplementing the diets of 11 patients with pancreatin at doses that were individualized according to the initial measurement of fecal fat excretion significantly increased the mean coefficients of absorption of dietary fat and energy during the first 4 weeks of study. Following randomization to pancreatin or placebo, continued enzyme supplementation sustained a significant improvement in protein absorption, whereas placebo substitution worsened the absorption of fat and total energy to levels lower than baseline. Improved protein absorption accounted for the significantly positive effect of pancreatin supplementation on mean nitrogen balance. Each capsule contained 8,000 USP U of lipase,13,000 USP U of protease, and 30,000 USP U of amylase in enteric-coated microspheres and mini microspheres (8). Digestive aid. Helps to decrease bloating after high caloric, high fat meals. Digestive aid to help decrease bloating after high caloric, high fat meals. Dosages: 5000 - 40000 USP units of lipase activity per day, 16600 - 14940 USP units of amylase activity per day and 15625 - 150000 USP units of protease activity per day (9).