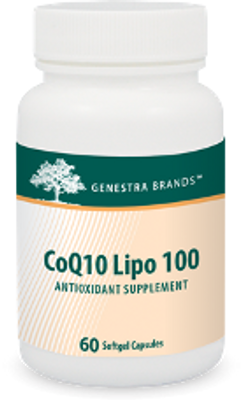 • Coenzyme Q10 in softgel capsules • Helps to maintain and support cardiovascular health and helps to reduce the frequency of migraine headaches and associated nausea and vomiting when taken as a prophylactic (1) • From bacterial fermentation • Emulsified formulation • In soya bean oil for enhanced absorption • Easy-to-use • One softgel capsule, two to three times daily ensures patient compliance

Complementary to our antioxidant formulas, the CoQ10 Lipo 100 high potency formula provides coenzyme Q10, an antioxidant required by tissues and organs to maintain and support cardiovascular health. Helps reduce the frequency of migraine headaches and associated nausea and vomiting when taken as a prophylactic.

Additional product info: Coenzyme Q10 (CoQ10) is a fat-soluble, vitamin-like, ubiquitous compound that functions as an electron carrier in the mitochondrial respiratory chain, as well as serving as an important intracellular antioxidant. CoQ10 protects phospholipids and mitochondrial membrane proteins from peroxidation and protects DNA against the oxidative damage that accompanies lipid peroxidation. CoQ10 concentration in blood cells was analyzed by HPLC and compared to plasma concentration before, during, and after CoQ10 (3 mg/kg/day) supplementation to human probands. Lymphocyte DNA 8-hydroxydeoxy-guanosine (8-OHdG), a marker of oxidative stress, was analyzed by Comet assay. Subjects supplemented with CoQ10 showed a distinct response in plasma concentrations after 14 and 28 days. Plasma levels returned to baseline values 12 weeks after treatment stopped. The plasma concentration increase did not affect erythrocyte levels. However, after CoQ10 supplementation, the platelet level increased; after sup- plementation stopped, the platelet level showed a delayed decrease. A positive correlation was shown between the plasma CoQ10 level and platelet and white blood cell CoQ10 levels. During CoQ10 supplementation, delayed formation of 8-OHdG in lymphocyte DNA was observed; this effect was long-lasting and could be observed even 12 weeks after supplementation stopped. Intracellular enrichment may support antioxidative defense mechanisms (2).

In a double-blinded, placebo-controlled, three crossover design to examine the effects of CoQ10 administration on physical fatigue , 17 healthy volunteers were randomized to oral CoQ10 (100 or 300 mg/d) or placebo administration for 8 days. As a fatigue-inducing physical task, subjects performed workload trials on a bicycle ergometer at fixed workloads twice for 2 h and then rested for 4 h. During the physical tasks, subjects performed non-workload trials with maximum velocity for 10 s at 30 min (30-min trial) after the start of physical tasks and 30 min before the end of the tasks (210-min trial). The change in maximum velocity from the 30- to the 210-min trial in the 300-mg coenzyme Q10-administered group was higher than that in the placebo group. In addition, subjective fatigue sensation measured on a visual analog scale in the 300-mg CoQ10-administered group after the fatigue-inducing physical task and recovery period was alleviated when compared with that in the placebo group. Oral administration of CoQ10 improved subjective fatigue sensation and physical performance during fatigue-inducing workload trials and might prevent unfavorable conditions as a result of physical fatigue (3). Another randomized, double-blind, placebo-controlled study was performed to examine the acute effects of a single dose of CoQ10 (30 mg) on the autonomic nervous system (ANS) by using power spectral analysis of HRV and energy metabolism at rest and during low intensity exercise in healthy subjects. During the exercise, HF power (High frequency component of the spectrum) and LF power (Low frequency component of the spectrum) in the CoQ10 trial showed a tendency to increase compared with the placebo trial. Total power representing the overall ANS activity was significantly increased in the CoQ10 trial during exercise, which implied that autonomic nervous activity was augmented by CoQ10. CoQ10 also induced enhanced lipid oxidation as shown by the significantly lower respiratory gas exchange ratio (R) and increased fat oxidation during exercise. These results suggested that CoQ10 may increase fat oxidation with augmented autonomic nervous activity during low intensity exercise (4).

CoQ10 is indispensable in bioenergetics and thus is indispensable to human life itself. The concentration of CoQ10 in the human myocardium is high, and it has been presumed for years that a myocardial deficiency of CoQ10 would be detrimental to cardiac function. A double-blind and double-crossover trial has been conducted by administering CoQ10 (3 x 33.3 mg daily) and a matching placebo orally to two groups of patients. Group A received CoQ10 and then placebo; group B received placebo and then CoQ10. Blood levels of CoQ10 and cardiac function were determined at 0 and 4 weeks (control stabilization period) and at 16 and 28 weeks (after the 12-week CoQ/placebo-treatment periods). For group A, significant increases in CoQ10 blood levels and cardiac function occurred during CoQ10 treatment and then decreased during crossover to placebo. For group B, there was no change in CoQ10 blood levels and cardiac function during placebo treatment, but increases in both parameters occurred in crossover to CoQ10. This clinical improvement could be due to correction of a myocardial deficiency of CoQ10 and to enhanced synthesis of CoQ10-requiring enzymes (5). A randomized controlled study was designed to determine whether oral CoQ supplementation (100 mg three times a day) for 1 month was able to improve extracellular superoxide dismutase (ecSOD) activity and endothelium-dependent (ED) vasodilation. A total of 33 patients completed the study. ecSOD, ED relaxation, as well as peak VO2 and O2 pulse increases in the CoQ10-treated group were statistically greater vs. the variations in the placebo group. In particular, improvements elicited by CoQ10 supplementation were remarkable in subjects presenting low initial endothelium-bound ecSOD and thus more prone to oxidative stress. Improvements in the ED relaxation and endothelium-bound ecSOD activity might be related to CoQ10 capability of enhancing endothelial functionality by counteracting nitric oxide oxidation. The enhancement of peak VO2 and of O2 pulse is likely due to the bioenergetic effect of CoQ10; on the other end, the improved VO2 could also depend on the observed enhanced peripheral endothelial function (6).