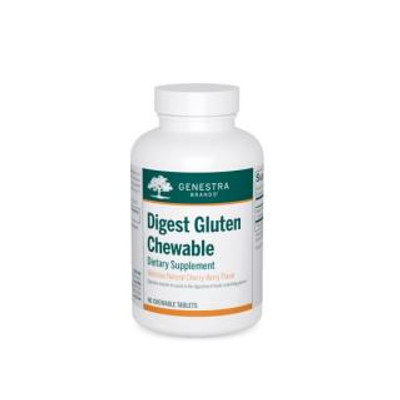 Digest Gluten Plus contains two major types of enzymes. One group of endoproteases cleaves the bonds of proteins and breaks them into peptides. The other is a group of exo-peptidases which cleave amino acids away from the end of peptides. In in vitro laboratory results, pure gluten protein and pure gliadin were placed in separate stomachers with and without Digest Gluten Plus for a period of two hours. The results show that the Digest Gluten Plus completely breaks down both the gluten and gliadin compared to the control. Product ideal for vegetarians.

Additional product info: Protease from Bacillus subtilis is a microbially-derived proteolytic enzyme which catalyses the hydrolysis of polypeptides such as gliadin and casein proteins into peptides of lower molecular weight. Protease is included in Genestra Brands™ Digest Gluten Plus to assist with digestion of dietary proteins. Protease from Bacillus subtilis has been affirmed as generally recognized as safe (GRAS) in the United States.

Enzymes from Aspergillus oryzae have been used in Asia for over 2000 years for production of koji, an enzyme preparation used in the production of miso, sake and soy sauce (1). Recently, oral use of fungal protease derived from Aspergillus oryzae has been shown to improve enteric protein digestion and utilization. In a randomized human clinical trial, subjects consumed a whey protein concentrate containing 42.5 g protein, or 42.5 g whey protein concentrate in combination with 2.5 g or 5 g of an enzyme preparation containing fungal proteases from Aspergillus oryzaea and Aspergillus niger. Subjects assigned to receive either 2.5 g or 5 g of enzyme preparation containing fungal proteases in combination with a large quantity of protein excreted significantly less nitrogen in a 24 hour period following protein consumption, when compared to control subjects. Total serum amino acids were also significantly greater in test subjects compared to control subjects, indicating more complete protein metabolism when oral proteolytic enzymes are taken in combination with a protein-containing meal. As a digestive aid, fungal proteases were found to significantly increase digestion and absorption of whey protein (2).

Fungal proteases from Aspergillus oryzae help digest proteins and are used as a digestive aid when consumed at 6250-125000 FCC hemoglobin units on the tyrosine basis, or 7.5-300 FCC spectrophotometric acid protease units, per day (3).