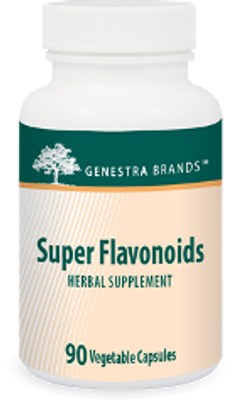 Super Flavonoids provides a broad range of bioflavonoids and green tea extract as an antioxidant for the maintenance of good health (2). The capsules are 100% pure vegetable-sourced. Product ideal for vegans.

Additional product info: Flavonoids are polyphenolic compounds that occur in most foods of plant origin and are significant though minor constituents of the human diet (3). Bioflavonoids, which include hesperidin, citrin, rutin, flavones, flavonols, catechin and quercetin, were formerly called “Vitamin P”, and were found to be essential components in improving the permeability and integrity of the capillary linings (4). Flavonoids possess antioxidants properties while being able to modulate a number of biological functions such as anti-inflammatory and anti-microbial activities (5). Six weeks' rutin supplementation (500 mg daily) significantly elevated the levels of three plasma flavonoids (quercetin. kaempferol and isorhamnetin) (6).

Green tea (GT) and black tea (BT) are both derived from the tea leaves of Camellia sinensis. GT is manufactured by drying the leaves of C. sinensis. The manufacture of BT requires an additional fermentation step, which generates theaflavins and thearubigins. Theaflavins and thearubigins are oligomeric polyphenolic compounds synthesized from monomeric tea flavanol units. Tea flavanols are regarded as the biologically active constituents of tea. The main flavanols found in GT, and to a lesser extent in BT, are (-)-epigallocatechin-3- gallate (EGCG), (-)-epigallocatechin (EGC), (-)-epicatechin-3-gallate (ECG), and (-)-epicatechin (EC). EGCG is the most abundant and widely studied tea polyphenol. EGCG and ECG have the highest radical scavenging activity (7).Experimental studies have revealed that green tea catechins can prevent influenza infection in vitro, but clinical evidence has so far been inconclusive. A randomized, double-blind, 2-group parallel study was conducted to compare the effects of green tea catechins and theanine (catechin/theanine) capsules with those of placebo on the prevention of influenza for 5 months during the influenza season. The participants were asked to take 6 capsules per day, containing a total of 378 mg catechins (including 270 mg (-)-epigallocatechin gallate) and 210 mg theanine or placebo. The incidence of clinically defined influenza infection was significantly lower in the catechin/theanine group compared with the placebo group. The time for which the patient was free from clinically defined influenza infection was significantly different between the two groups (8).In 20 young healthy smokers, endothelial functions, defined by flow-mediated endothelium dependent vasodilation (FMD) of the brachial artery via ultrasound as well as the number of endothelial progenitor cells (EPCs) isolated from peripheral blood, were determined at baseline and at 2 weeks after green tea consumption (8 g/day). Circulating EPCs by flow cytometry and cultured EPCs increased rapidly at 2 weeks after green tea consumption. FMD was significantly improved after 2 weeks (9).

A double-blind, placebo-controlled, crossover study examined the effect of Hyben Vital, a herbal remedy made from a subtype of Rosa canina which has recently been reported to have anti-inflammatory properties, on the symptoms of osteoarthritis. One hundred and twelve patients with osteoarthritis were randomly allocated to treatment with either Hyben Vital 5 g daily or an identical placebo for 3 months, followed immediately by the alternative treatment. The data of the study indicate that Hyben Vital reduces the symptoms of osteoarthritis (10). In another double-blind placebo-controlled trial, patients with rheumatoid arthritis (RA) according to ARA/ACR criteria were randomised to treatment with encapsulated rose-hip powder 5g daily or matching placebo for 6 months. Health Assessment Questionnaire (HAQ) in the rose-hip group improved whereas in the placebo group it worsened. The Physicians Global Scale demonstrated more improvement in the rose-hip compared to the placebo group. RAQoL and SF-12 physical score improved significantly in the rose-hip group compared to placebo. The results indicate that patients with RA may benefit from additional treatment with rose hip powder (11).

In terms of the active chemical species, cruciferous vegetables (CVs) are rich sources of glucosinolates, a class of sulfur- and nitrogen-containing glycosides that are hydrolyzed (by plant myrosinase or intestinal microflora) to form isothiocyanates. Watercress (Rorippa nasturtium-aquaticum) in particular contains one of the highest concentrations of glucosinolates per gram weight of any vegetable as well as containing high concentrations of carotenoids such as lutein and ?-carotene. A single-blind, randomized, crossover study was conducted in 30 men and 30 women (30 smokers and 30 non smokers) with a mean age of 33 years of age. The subjects were fed 85 grams raw watercress daily for 8 wk in addition to their habitual diet. Watercress supplementation (active compared with control phase) was associated with reductions in basal DNA damage, in basal plus oxidative purine DNA damage, and in basal DNA damage in response to ex vivo hydrogen peroxide challenge. Beneficial changes seen after watercress intervention were greater and more significant in smokers than in non-smokers. Plasma lutein and ?-carotene increased significantly after watercress supplementation (12).

Alfalfa aerial parts at 9-30 grams per day is traditionally used in Herbal Medicine as a nutritive tonic (13).