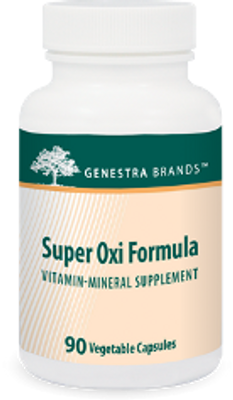 Super Oxi Formula combines the antioxidants in a synergistic, broad-spectrum formula to assist the body’s defense against free radical damage. An antioxidant for the maintenance of good health. The capsules are 100% pure vegetable-sourced.

Additional product info: Beta-carotene at 65-3,000 mcg RAE per day is a source of Vitamin A to help maintain eyesight, skin, membranes and immune function (2). Selenium at 3.5-400 ?g per day is an antioxidant for the maintenance of good health (3). In a prospective, randomized study design, immunological changes in free-living, healthy aged humans (57-84 years of age) given a placebo, beta-carotene (45 mg/day), selenium (400 µg/day) or 45 mg beta-carotene plus 400 mcg selenium per day for 6 months, and after 2 months of discontinuation were evaluated. Selenium and selenium plus beta-carotene supplementation caused an increase in total T cells. The study found that selenium enhanced immune function (NK cell cytotoxicity) and phenotypic expression of T-cell subsets, whereas beta-carotene affected only immune function (4). Adequate zinc status is critical for immune function. Zinc deficiency reduces generation of T cells, depresses humoral and cell-mediated immunity, leads to lymphopenia and thymic atrophy, and increases the frequency and number of infections (5). A prospective, randomized, controlled clinical trial was conducted involving 231 HIV-infected adults with low plasma zinc levels, who were randomly assigned to receive zinc (12 mg of elemental zinc for women and 15 mg for men) or placebo for 18 months. Zinc supplementation given to HIV-infected adults resulted in a 4-fold decrease in the likelihood of immunological failure, defined as a decrease of CD4+ cell count to <200 cells/mm3, after 18 months of use, compared with placebo. Zinc supplementation also significantly reduced diarrhea, compared with placebo (6). Growing evidence suggest that antioxidant vitamins might reduce the risk of disease outcomes by their ability to scavenge free radicals. A case-control study with vitamin E (400 IU/d) and vitamin C (500 mg/d) supplementation in 40 patients for 2 months showed reduced lipid peroxidation and a strengthened antioxidant defense system. Hence, vitamin E and vitamin C supplementation may have beneficial effects on the heart by reducing oxidative stress (7). A group of researchers defined the dose-dependent effects of vitamin E (RRR-?-tocopherol) to suppress plasma concentrations of F2-isoprostanes, a biomarker of free radical mediated lipid peroxidation, in participants with polygenic hypercholesterolemia and enhanced oxidative stress, a population at risk for cardiovascular events. A time-course study was first performed in participants supplemented with 3200 I.U./day of vitamin E for 20 weeks. A dose-ranging study was then performed in participants supplemented with 0, 100, 200, 400, 800, 1600, or 3200 I.U./day of vitamin E for 16 weeks. In the time-course study, maximum suppression of plasma F2-Isoprostane concentrations did not occur until 16 weeks of supplementation. In the dose-ranging study there was a linear trend between the dosage of vitamin E and percent reduction in plasma F2-isoprostane concentrations which reached significance at doses of 1600 I.U and 3200 I.U (8).

The effect of ozone exposure on respiratory health has been demonstrated in animal and clinical human studies, as well as in epidemiological investigations conducted among children and adults. Among young adults, short-term exposure to ozone has been associated with increased airway inflammation, respiratory symptoms, and decrement in lung functions. Vitamin E is the principal defense against oxidant-induced membrane injury in human tissue. Ozone and vitamin E have opposite effects on the immune system, thus vitamin E could protect people against the adverse effects of photo-oxidant exposure by trapping and neutralizing free radicals. Beta carotene, which accumulates in tissue membranes, is known as a free-radical scavenger that can react directly with peroxyl free radicals, thereby serving as an additional lipid-soluble antioxidant. Vitamin C contributes to antioxidant activity through several mechanisms. It does so primarily by scavenging O2-, but it also contributes to the regeneration of membrane-bound oxidized vitamin E, allowing it to function again as a chain-breaking antioxidant. Dietary intake of these vitamins may therefore play a role in the host’s defense against oxidative lung damage. A double-blind crossover trial was conducted, and participants (n=47) were randomly assigned to take a daily supplement (650 mg vitamin C, 75 mg vitamin E, and 15 mg beta carotene) or a placebo. During the first phase, ozone levels were inversely associated with FVC, FEV1, and FEF25–75 in the placebo group but not in the supplement group. The difference between the two groups was significant for FVC, FEV1, and FEF25–75. During the second phase, similar results were observed, but the lung function decrements in the placebo group were smaller, suggesting that the supplementation may have had a residual protective effect on the lung. These results suggest that supplementation above the recommended allowance of Vitamin C, Vitamin E and Beta-carotene may provide additional protection against the acute effect of high ozone exposure on lung functions (9). The results of another study suggest that antioxidant vitamin supplementation protects against acute effects of ozone on lung function in heavily exercising amateur cyclists. In the study, the supplementation group (n=12) received antioxidant supplements (15 mg ?-carotene, 75 mg vitamin E, and 650 mg vitamin C) once a day for three months (10). A randomized, double-blind, placebo-controlled trial was conducted to determine the effect of 1 year of vitamin E supplementation on respiratory tract infections in elderly nursing home residents. A total of 617 persons aged at least 65 years and who met the study’s eligibility criteria were enrolled and Vitamin E (200 IU) or placebo capsule were administered daily. Fewer participants receiving vitamin E acquired 1 or more respiratory tract infections or upper respiratory tract infections. When common colds were analyzed in a post hoc subgroup analysis, the vitamin E group had a lower incidence of common cold and fewer participants in the vitamin E group acquired 1 or more colds. Supplementation with 200 IU per day of vitamin E did not have a statistically significant effect on lower respiratory tract infections in elderly nursing home residents. However, a protective effect of vitamin E supplementation on upper respiratory tract infections, particularly the common cold, was observed (11).

Wine polyphenols have been postulated to have many favourable effects but most of this data has been obtained in vitro. Grape seed extracts (GSEs) contain a high concentration of many of the polyphenols in grape skins, in particular, the proanthocyanidins, which are also found in red wine. A fully randomised, crossover trial with 4-week treatment periods on 36 men and women with above-average vascular risk, aimed to demonstrate that 2 g/day of GSE (1 g of polyphenols) alone, or with 1 g/day of added quercetin in yoghurt, favourably alters vascular function, endothelial function, and degree of oxidative damage in comparison to a control yoghurt. Sufficient polyphenols from GSE appear to be absorbed to influence endothelial nitric oxide production, and GSE has the potential to favourably influence vascular function (12). Following consecutive 12-wk administration of tablets containing 0, 200 or 400 mg grape seed extract (calculated as proanthocyanidin) to 61 healthy subjects with LDL cholesterol (LDL-C) levels of 100 to 180 mg/dL, effects of such treatment compared to administration of placebo tablets on malondialdehyde-modified LDL (MDA-LDL), representing one oxidized type of LDL, were investigated by a single blind method. MDA-LDL level in the 200 mg (calculated as proanthocyanidin) group was significantly reduced compared to the basal level, 12 wk after the start of administration. In the 400 mg (calculated as proanthocyanidin) group, a significant decrease in MDA-LDL level compared to the basal level was found 6 and 12 wk after the start of administration. Subjects with high levels of MDA-LDL/ApoB in the 200 mg group showed significantly reduced MDA-LDL levels at 12 wk after the start of administration. In the 400 mg group, significant decreases in MDA-LDL level compared to the basal level were seen 6 and 12 wk after the start of administration; and at week 6, significantly lower values were observed compared to those in patients who took placebo tablets (0 mg proanthocyanidin). These results suggested that tablets containing grape seed extract exerted reducing effects on oxidized LDL (13). Grape Seed Extract at a dosage not to exceed 475 mg per day (80-85% oligomeric proanthocyanidins) is a source of antioxidant for the maintenance of good health, and at 150-475 mg per day (80-85% oligomeric proanthocyanidins) helps to relieve symptoms related to non-complicated chronic insufficiency (CVI), such as sensation of swelling, heaviness and tingling of the legs (14).