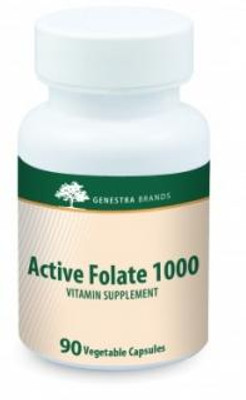 Biologically active folate rich formula Promotes healthy homocysteine levels Provides 1000 mcg of folate per day from Metafolin?? Active Folate 1000 provides 1000 mcg of folate per day from Metafolin?? in its physiologically active form.1* Folate is primarily involved in DNA synthesis and methylation reactions, including the conversion of homocysteine to methionine.2 Supplementation has been shown to be the most effective method for raising folate status, yielding superior results to dietary intake.3* Metafolin?? is a proprietary and bioavailable form of the folate found naturally in foods that does not mask a vitamin B12 deficiency.1* Randomized, placebo-controlled trials have found that daily supplementation with Metafolin?? promotes healthy levels of both folate and homocysteine.5,6*