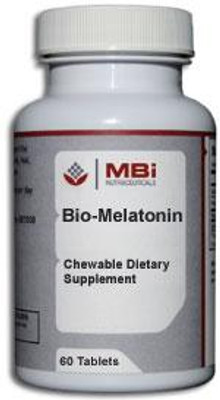 Relax and help yourself get to sleep with an all-natural sleep aid. Try MBi’s formula instead of an over-the-counter sleep aid.

Among its key roles, melatonin controls the body's circadian rhythm, an internal 24-hour time-keeping system that plays an important role in when we fall asleep and when we wake up. Darkness stimulates the release of melatonin and light suppresses its activity. Normal melatonin cycles are disrupted when we are exposed to excessive light in the evening or too little light during the daytime. For example, jet lag, shift work, and poor vision can disrupt melatonin cycles.

A number of studies indicate melatonin supplementation helps to reduce the age-related decline in hormone production from the thyroid and pituitary glands.

An investigation was done into the efficacy of oral melatonin in alleviating jet lag in flight crews after a series of international flights. The optimal time for taking melatonin was also investigated. When melatonin 5 mgs was given on arrival for 5 days a trend showing improved recovery in jet-lag, mood and sleepiness was shown. There was also a significantly faster recovery of energy and alertness.

A study was done with shift workers. 5 mgs melatonin was given at bedtime and increased alertness in waking hours was observed.

In treating insomnia, melatonin was given at 6 pm and 8 pm close to times of endogenous melatonin release and habitual sleep onset. No "hangover" effects were noted as assessed by mood and performance tests administered the morning after treatment.

Melatonin has also been found to be efficacious in delayed sleep phase syndrome. 5 mgs/day was administered for one month. Mean sleep onset time was advanced 115 mins and mean final awakening hour by 106 mins.