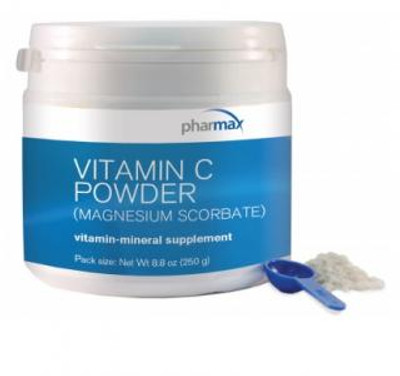 • Vitamin C from magnesium ascorbate • Source of antioxidants for the maintenance of good health (1) • Helps in the development and maintenance of bones, cartilage, teeth and gums (2) • Helps the body to metabolize carbohydrates, fats and proteins (3) • Helps in tissue and connective tissue formation and in wound healing (4) • Helps to maintain proper muscle function (5) • Helps to prevent vitamin C deficiency (6) • Ideal for vegans • Convenient flavorless powder format

Additional product info: Epidemiological studies have shown that competitors in ultrarmarathon (> 42 km) footraces report a significantly higher incidence of symptoms of upper-respiratory-tract (URT) infections in the immediate postrace period when compared with the incidence among sedentary control subjects during the same time period. A double-blind placebo-controlled study determined whether daily supplementation with 600 mg vitamin C for 21 days before the marathon, would reduce the incidence of symptoms of URT infections after participation in a competitive ultramarathon race. Symptoms of URT infections were monitored for 14 days after the race. Sixty-eight percent of the runners in the placebo group reported the development of symptoms of URT infection after the race; this was significantly more than that reported by the vitamin C-supplemented group (33%). The duration and severity of symptoms of URT infections reported in the vitamin C-supplemented nonrunning control group was also significantly less than in the nonrunning control group receiving the placebo. This study provides evidence that vitamin C supplementation may enhance resistance to the postrace URT infections that occur commonly in competitive ultramarathon runners and may reduce the severity of such infections in those who are sedentary (3). The effects of megadose Vitamin C in preventing and relieving cold and flu symptoms in a students test group, compared with a control group, were studied. Those in the control population reporting symptoms were treated with pain relievers and decongestants, whereas those in the test population reporting symptoms were treated with hourly doses of 1000 mg of Vitamin C for the first 6 hours and then 3 times daily thereafter. Those not reporting symptoms in the test group were also administered 1000-mg doses 3 times daily. Overall, reported flu and cold symptoms in the test group decreased 85% compared with the control group after the administration of megadose Vitamin C. Vitamin C in megadoses administered before or after the appearance of cold and flu symptoms relieved and prevented the symptoms in the test population compared with the control group (4). Magnesium (Mg) is the second most abundant intracellular cation in vertebrates. Mg ion is a critical cofactor in more than 300 enzymatic reactions involving energy metabolism, and protein and nucleic acid synthesis. Accordingly, Mg is essential for various normal tissue and organ functions. The primary source of Mg in humans is from the diets. The dietary Mg ion is absorbed in the intestine through both active and passive transport systems. Excessive Mg is rapidly excreted into the urine. During Mg deprivation, the kidney avidly conserves Mg and excretes virtually no Mg in the urine. Approximately half of the total Mg in the body of a normal adult human is present intracellularly in soft tissues, and the other half is found in bone, either as exchangeable, surface-bound, divalent cations, which may serve as a reservoir for maintaining normal extracellular Mg level, or as an integral component of the hydroxyapatite lattice in bone matrix, which may be released during bone resorption. Thus, in addition to the intestine and kidney, the bone is involved in Mg homeostasis. Past studies with Mg depletion in both humans and animals indicate that Mg may have key regulatory roles in bone and mineral metabolism. A study examined the effects of daily oral magnesium (Mg) supplementation on bone turnover in 12 young (27–36 yr old) healthy men. The study group received orally, for 30 days, 15 mmol Mg (Magnosolv powder, Asta Medica, containing 670 mg magnesium carbonate precipitate (equivalent to 169 mg Mg) and 342 mg magnesium oxide (equivalent to 196 mg)) daily in the early afternoon with 2-h fasting before and after Mg intake. Mg supplementation reduced levels of both serum bone formation and resorption biochemical markers after 1–5 days, consistent with the premise that Mg supplementation may have a suppressive effect on bone turnover rate. The study concludes that oral Mg supplementation may suppress bone turnover in young adults. Because increased bone turnover has been implicated as a significant etiological factor for bone loss, these findings raise the interesting possibility that oral Mg supplementation may have beneficial effects in reducing bone loss associated with high bone turnover, such as age-related osteoporosis (5). In another study, twenty postmenopausal women have been divided into two groups. Ten patients were given magnesium citrate (1,830 mg/day providing 205 mg elemental magnesium) orally for 30 days. Ten postmenopausal women of matching age, menopause duration, and BMI were recruited as the control group and followed without any medication. Thirty consecutive days of oral magnesium supplementation caused significantly decrease in serum iPTH levels in the Mg-supplemented group. Serum osteocalcin levels were significantly increased and urinary deoxypyridinoline levels were decreased in the Mg-supplemented group. This study has demonstrated that oral magnesium supplementation in postmenopausal osteoporotic women suppresses bone turnover (6).

Magnesium is involved in numerous processes that affect muscle function including oxygen uptake, energy production and electrolyte balance. Thus, the relationship between magnesium status and exercise has received significant research attention. This research has shown that exercise induces a redistribution of magnesium in the body to accommodate metabolic needs. There is evidence that marginal magnesium deficiency impairs exercise performance and amplifies the negative consequences of strenuous exercise (e.g., oxidative stress). Strenuous exercise apparently increases urinary and sweat losses that may increase magnesium requirements by 10-20%. Based on dietary surveys and recent human experiments, a magnesium intake less than 260 mg/day for male and 220 mg/day for female athletes may result in a magnesium-deficient status. Recent surveys also indicate that a significant number of individuals routinely have magnesium intakes that may result in a deficient status. Athletes participating in sports requiring weight control (e.g., wrestling, gymnastics) are apparently especially vulnerable to an inadequate magnesium status. Magnesium supplementation or increased dietary intake of magnesium will have beneficial effects on exercise performance in magnesium-deficient individuals. Magnesium supplementation of physically active individuals with adequate magnesium status has not been shown to enhance physical performance (7). The effects of magnesium supplementation on blood parameters were studied during a period of 4 weeks in adult tae-kwon-do athletes at rest and exhaustion. Thirty healthy subjects of ages ranging in age from 18 to 22 years were included in the study. The subjects were separated into three groups, as follows: Group 1 consisted of subjects who did not train receiving 10 mg/kg/day magnesium. Group 2 included subjects equally supplemented with magnesium and exercising 90-120 min/day for 5 days/week. Group 3 were subject to the same exercise regime but did not receive magnesium supplements. The leukocyte count (WBC) was significantly higher in groups 1 and 2 than in the subjects who did not receive any supplements. There were no significant differences in the WBC of the two groups under magnesium supplementation. The erythrocyte, hemoglobin, and trombocyte levels were significantly increased in all groups, but the hematocrit levels did not show any differences between the groups although they were increased after supplementation and exercise. These results suggest that magnesium supplementation positively influences the performance of training athletes by increasing erythrocyte and hemoglobin levels (8).