GLUTATHIONE, a naturally occurring protein, is called a peptide. It is composed of three amino acids: glycine, glutamine and cysteine. Cysteine contains sulfur and gives glutathione its sulfuric aroma. It also plays a major role in glutathiones antioxidant and detoxification functions. With its anti-inflammatory properties, glutathione is considered a key antioxidant in the functioning of cells. Antioxidant means it helps prevent oxidative stress. OXIDATIVE STRESS Oxidation in the outside world is the chemical mechanism that causes rust. Inside the body oxidation damage, called oxidative stress, causes damage to the proteins that keep the cells and their membranes running. Oxidative stress refers to toxins produced inside the body (free radicals) and those from without, which are often caused by the environment. (Air pollution, heavy metals, cigarette smoke, radiation, drugs) Glutathione plays a critical role in defending cells again this oxidative stress. Therefore, a deficiency of glutathione plays a key role in aging and many disease states. One teaspoon contains over 420 mg of reduced glutathione. 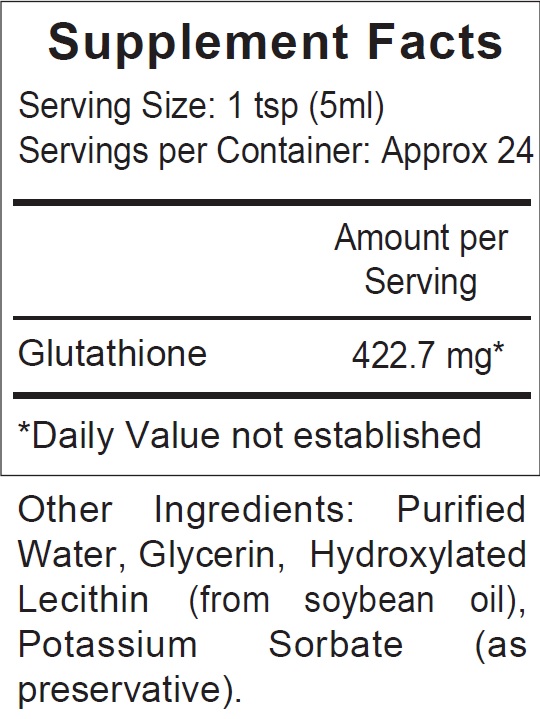 Ingredients (NO Alcohol) Reduced l-glutathione Purified water Lecithin - The liposomes in ReadiSorb Glutathione are derived from lecithin. The lecithin is an extract of soy oil, not protein. Glycerin - Glycerin is used as a sweetener and preservative. It supports the stability of the liposomes and allows for the extended shelf life. Glycerin is a normal product of fat metabolism and is readily converted to glucose for metabolism. Potassium Sorbate - A natural material used as a preservative to prevent yeast and mold growth. It is a form of sorbic acid, a naturally occurring fatty acid which is easily metabolized in the body. Potassium sorbate is used to preserve wine, baked goods and cheese.