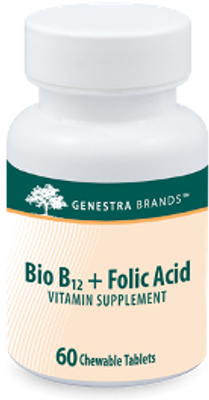 Bio B12 + Folic Acid is a great-tasting natural cherry-flavored, chewable combination. A factor in the maintenance of good health. Helps in red blood cell formation. Helps reduce the risk of neural tube defects when taken daily prior to becoming pregnant and during early pregnancy and helps prevent vitamin B12 deficiency. Helps the body to metabolize carbohydrates, fats and proteins (2).

Additional product info: Aging is accompanied by a variety of physiological, psychological, economic and social changes that compromise nutritional status and/or affect nutritional requirements. For these reasons, the diets of many older adults do not currently meet the recommended intake levels of several essential vitamins and minerals; thus, low micronutrient status is often reported in this population. Nutritional status surveys of the elderly indicate a low to moderate prevalence of frank nutrient deficiencies, but an increased risk of malnutrition, along with evidence of subclinical deficiencies having a direct impact on physiologic function. Overt micronutrient deficiencies have been reported as prevalent in nursing home populations, and recommendations have been made that all institutionalized older adults receive a multivitamin/mineral supplement for general nutritional prophylaxis. A clinical study has shown that multivitamin treatment for 8 weeks significantly increased, compared to placebo, plasma concentrations of vitamins D, E, pyridoxal phosphate, folate, B12, C, and improved the riboflavin activity coefficient. Supplementation with a multivitamin formulated at about 100% Daily Value can thus decrease the prevalence of suboptimal vitamin status in older adults and improve their micronutrient status to levels associated with reduced risk for several chronic diseases (3).

Micronutrient deficiencies have been associated with significantly high reproductive risks, ranging from infertility to fetal structural defects and long-term diseases. There is consistent scientific evidence that folic acid is of critical importance both pre- and periconceptionally in protecting against Neural Tube Defects (NTDs) in the developing fetus. In general, women are advised to take 0.4 mg/day when planning a pregnancy whereas they are recommended to take 4.0 mg/day if they experienced a previous pregnancy affected by NTD (4).

The B vitamins folate, vitamin B6 (pyridoxine), and vitamin B12 (cobalamin) are important regulators of homocysteine metabolism in the body, and randomized controlled trials have demonstrated that supplementation with folate at doses up to 500 µg daily alone or in combination with vitamins B6 and B12 significantly reduces blood homocysteine concentrations (5). Epidemiological evidence suggests that total plasma homocysteine level is an independent cardiovascular risk factor and may have a potential role with regard to outcome after coronary interventions. Studies on the pathogenesis of homocysteine-induced vascular damage have suggested adverse interaction with vascular smooth muscle cells, endothelium function, plasma lipoproteins, and coagulation cascade. A study provides evidence that homocysteine-lowering therapy with folic acid (1 mg/d), vitamin B12 (cyanocobalamin, 400 ?g/d), and vitamin B6 (pyridoxine hydrochloride, 10 mg/d) for 6 months improves outcome after percutaneous coronary intervention (6). In a large cohort of male Finnish smokers, a high dietary folate intake was associated with a significantly lower risk of cerebral infarction (7).

Elderly individuals are susceptible to neurodegenerative diseases that are characterized by cognitive and emotional dysfunction, and severe cortical and subcortical deterioration. Previous studies have reported that high concentrations of homocysteine and lower concentrations of vitamin B6, B12, and folate increase the risk for cognitive decline and pathology in aging populations. Using an optimized voxel-based morphometry (VBM) method and global gray and white matter volume after correcting for age, sex, body mass index, calorie intake, and education, a study showed that adults with greater vitamin B6 (27 mg total) intake had greater gray matter volume along the medial wall, anterior cingulate cortex, medial parietal cortex, middle temporal gyrus, and superior frontal gyrus, whereas people with greater B12 (63.2 µg total) intake had greater volume in the left and right superior parietal sulcus. This study provides intriguing results for the use of B vitamin intake on brain volume and adds to a growing literature on the inverse relationship between vitamin B6, B12, and folate (1927 µg total) on tHcy levels and the risks and effects of tHcy and vitamin intake on cognition and the brain in both pathological and non-pathological aging populations (8).